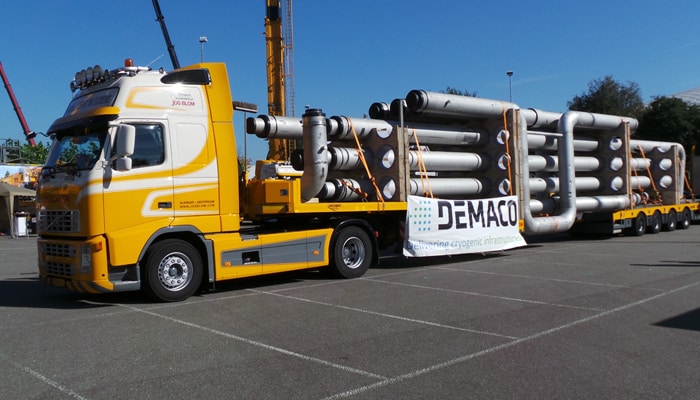 Early 2013 Demaco has acquired an order to build the vacuum insulated transfer lines for the largest LNG receiving terminal in Scandinavia, to be built by Cryo AB for Skangass. The receiving terminal is under construction next to Preem’s refinery in Lysekil (100 km north of Gothenburg ) on the west coast of Sweden. Demaco has engineered, produced and delivered around 1.7 km vacuum insulated pipeline for LNG with a process diameter of 12”. Line lengths per spool were up to 24 meters.

Besides delivery of LNG to Preem’s refinery, a truck loading facility will be built in connection to the terminal. The terminal will also become an important hub for distribution of LNG as fuel for ships. A shift to LNG as fuel is one of the most effective ways to reduce CO2 emissions and meet stricter environmental requirements. The gas will come from the LNG plant at Risavika (another LNG project Demaco is working on with vacuum insulated piping) near Stavanger. LNG will be delivered to Lysekil using Skangass LNG carrier – Coral Energy. The LNG terminal is scheduled to be in operation by the first half of 2014, an investment estimated at 55 million EUR.

In total 11 special truckloads were required to transport all the sections to Lysekil. At the end of 2013 the last truckload of sections left the Demaco premises and arrived at the Terminal to the full satisfaction of the customer. The installation on site is completed and finally on 20 october 2014 this LNG terminal was officially opened. It’s all about Cryogenius.

Manage Cookie Consent
To provide the best experiences, we use technologies like cookies to store and/or access device information. Consenting to these technologies will allow us to process data such as browsing behaviour or unique IDs on this site. Not consenting or withdrawing consent, may adversely affect certain features and functions.
Manage options Manage services Manage vendors Read more about these purposes
View preferences
{title} {title} {title}
Receive product sheets